Beehives were transported by the Egyptians in boats to pollinate farm crops grown along the Nile River.
How did European honey bees get to America?  Beehives were brought to America from Europe on some ships by the early settlers of this country.  The skeps were attached to the bow of ships with the entrance facing the open sea.  The journey across the Atlantic Ocean took over 60 days in difficult weather conditions and storms.  This was a dangerous trip.  Some of the new settlers and beehives did not survive the journey.  The hives that did survive spread vigorously in their New World!
Beehives have been used in human warfare by throwing them from catapults or dropping them from high city walls onto the enemy below.  Poison honey has been left for hungry enemy soldiers to find and eat becoming very sick and even left to die.
Mankind has often exploited bees and every resource, possible to exploit with little regard for our fragile environment or future generations!  I was in the Oakland Airport on my way to Phoenix, AZ, from where I am writing this article.  There was a pictorial history of the San Francisco Bay.  This showed today there is still mining pollution flowing into the Bay Estuary from the 1849 Gold Rush in California–167 years later!
If we could only learn and emulate what our honey bees teach us by their example!  Cooperation, humility, consensus, unity, defending one another and protecting their young.  Yes, bees are industrious!  We know honey bees add tremendous value to the environment around them by their pollination work, gathering nectar, propolis and water.  Everything bees produce is non-toxic, health-giving, anti-bacterial, anti-microbial, anti-fungal and biodegradable for themselves with gifts to humans and their environment.
It is one of the greatest privileges of my life for me to assist and learn from working with honey bees.  I love my “bee world” along with you, my bee friends, mentors and teachers…we all have the opportunity as Mahatma Gandhi said, “Bee the change you wish to see in the world!”
AS BEEKEEPERS, WE ARE CHANGING BEE HISTORY IN THE WORLD ONE HIVE AT A TIME! 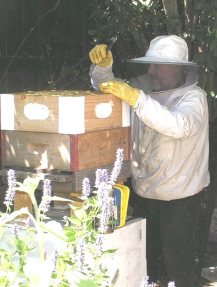 We know honey bees have age-dependent jobs in the hive.  However, younger bees sometimes fill the “older bee jobs” earlier than normal when not enough bees are doing the work needed by the colony.

For example, if there are not enough foragers, younger bees can become foragers at an earlier age.  This allows for greater hive flexibility.  Bees also somehow know who goes in the swarm and who stays with the mother hive.  Bees do not have to “pick a number”, to decide—like we do!”  Do they read each other’s minds?

Instead of thinking of a single bee job one after another based on a bee’s age, we can expand the concept to a “colony need based model” with some job rotation.  One good example of this are “heater bees”.  These bees are a more recent discovery.  Bees of almost all ages can become “heater bees”.  They do this by detaching their flight wings and the vibrating their bodies while their wings are motionless.  By doing this they can heat their bodies up to 111 degrees Fahrenheit in the brood area.  Scientists have used infrared technology to discover these facts.

Good queens may leave empty brood cells to be used by heater bees to crawl in and keep the surrounding 70 cells at the right temperature.  THIS MAKES IT VERY IMPORTANT TO GIVE THE QUEEN ENOUGH ROOM IN THE BROOD NEST SO SHE DOES NOT HAVE TO LAY IN THE CELLS SHE WANTS TO LEAVE EMPTY.  I am not talking about “spotty brood” which is a problem of queen/hive weakness that may lead to beehive die off.

The normal brood temperature is kept by the nurse and house bees at 93 degrees.  The bees emerging from this temperature have a normal hive job progression. When “heater bees” raise the brood temperature to 95 degrees, the brood that hatches prefers to forage more than to do other hive jobs.  NOT CHILLING THE BROOD IS CRITICAL THROUGHOUT THE YEAR FOR THIS REASON!  “Heater bees” are given food by supplier bees who feed the heater bees so they can keep a consistent temperature where they place themselves in the brood nest.  Then other bees rotate in and become “heater bees” when needed.  Every bee cooperates by doing their part of the work that needs to be done for the good of the hive!

The more we look into the life of bees in our hives, the more we can see bee “multi-job tasking” and job rotation involves complex decision making honey bee-havior!